×
by Jonathan Blitzer, The New Yorker

The Fight for the Latino Vote in Florida 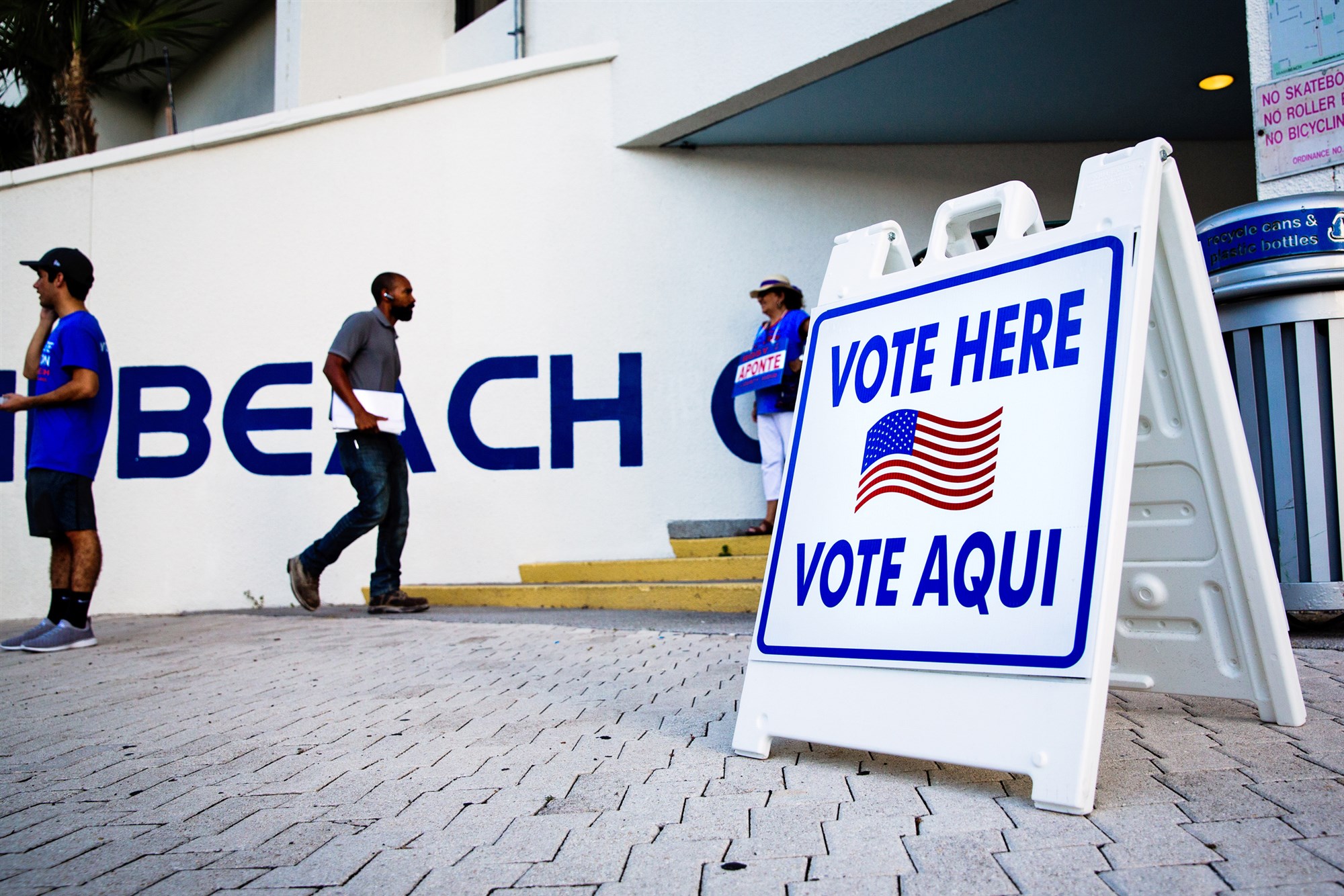 One afternoon last February, Donald Trump stood at a lectern at Florida International University, in Miami, and before a cheering crowd of a thousand called President Nicolás Maduro of Venezuela a “dictator” and a “Cuban puppet.” Trump was flanked by two enormous flags, Venezuelan and American, and the word Democracia flashed on a screen behind him. Chants in Spanish alternated between thanking Trump (“We’re with you!”) and taunting Maduro (“He’s already fallen!”). “It was like a rock concert,” Rafael Fernandez, who left Venezuela nearly two decades ago, told me.

The Trump Administration had recently instituted sanctions against Venezuela’s state oil company, which supplies the overwhelming majority of the government’s budget, and more than fifty countries, including the U.S., now recognized the opposition leader, Juan Guaidó, as the country’s legitimate President. Trump had also floated the possibility of a military intervention. Marco Rubio, the Republican senator from Florida, who is influential on Latin-American issues, claimed that high-ranking officers in the Venezuelan military were poised to defect. Addressing those who weren’t, Trump warned, “You will find no safe harbor, no easy exit, and no way out. You’ll lose everything.”

Fernandez was in the audience with his father, Francisco. The two argued constantly about Trump. Rafael told me that he was “more pro-Trump than anti.” His father, a former Venezuelan politician, is a lifelong conservative, but when he voted for the first time in an American election, in 2016, it was for Hillary Clinton; he despised Trump.

Francisco’s sentiments were rare among his neighbors in Doral, a small city of strip malls and golf courses west of Miami. There are more than two hundred thousand Venezuelans in Florida, more than anywhere else in the country, and the majority live in the Doral area. Many of them are recent arrivals—some four million people have left Venezuela in the past four years, ten per cent of the country’s population. The exodus began after Maduro was elected, in 2013, when, in response to dwindling oil prices and economic mismanagement, the government tried to stave off collapse by printing more money. Earlier this year, with inflation close to two million per cent, a bottle of ketchup cost nine dollars, but a minimum-wage job paid about six dollars a month. Maduro has responded to public protests by jailing and killing dissenters; death squads aligned with the government have assassinated at least seven thousand people in the past year and a half. Condemnation of Maduro has been widespread in the U.S. and other countries, but no one has denounced the regime as aggressively as Trump has. In Doral, Rafael said, “you were a pariah if you didn’t support Trump.”

Rafael, who is twenty-eight, manages a car dealership, and he and his father run a Web site called Bienvenidos Venezolanos. They created it eight years ago as an advice hub for Venezuelans in Florida, with links to immigration lawyers, job postings, and real-estate listings. It’s a low-budget operation, with a single full-time employee, but by the end of last year, when Venezuelans were responsible for the largest share of asylum applications in American immigration courts, the site was getting five thousand hits a day.

Rafael said that, at the rally, anticipating Maduro’s downfall, “we were thinking, We could be free next month.” When Trump promised a “new day” in Latin America, asserting that “all options are open,” Rafael looked at his father, who had tears in his eyes. “Oh, my God,” Francisco said. “It’s happening.”

Only a small percentage of the recently arrived Venezuelans are eligible to vote, but many Latin Americans in Florida see the Venezuelan government as the nexus of the region’s worst problems. The repressive socialist leaders in Cuba and Nicaragua depend on Venezuela for oil and for political support. Colombia, which borders Venezuela, has taken in more than a million refugees. “If you solve the Venezuela problem, you get three for the price of one,” a state Republican operative told me. “You’ll make the Colombians, Nicaraguans, and Cubans in Florida very happy.”

In every Presidential election since 1992, the winner of Florida has gone on to the White House. Trump won the state, which has a population of twenty-one million, by a hundred and thirteen thousand votes. He’s since made it the centerpiece of his reëlection effort, launching his campaign in Orlando and making frequent visits to South Florida to deliver major addresses on Cuba and Venezuela. Local politicians call Interstate 4, which runs between Tampa and Daytona Beach, “The road to the White House.”

(Read the full story in The New Yorker. See link below)