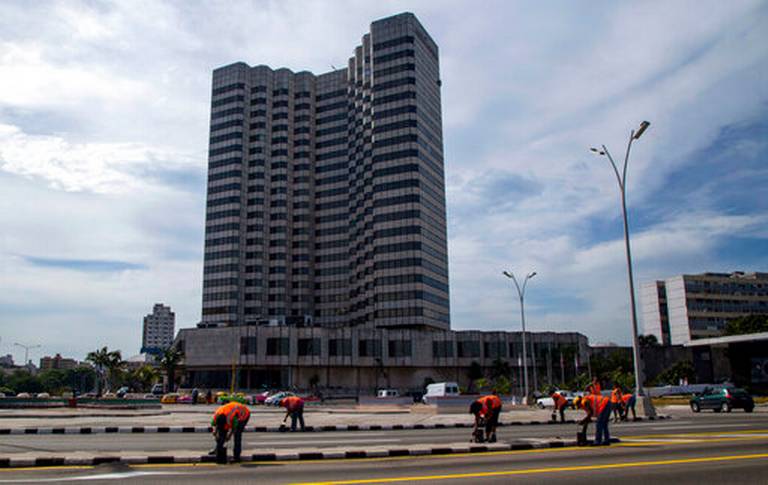 The White House will allow Americans to file suit in U.S. courts against about 200 Cuban companies that now control property on the island that was seized by the Havana government decades ago.

But the Trump administration stopped short of allowing Americans to sue foreign companies, delaying that measure by at least 30 days as Washington tries to see what levers it should pull to build international support for a U.S. pressure campaign against Venezuela.

“A country like Spain for example obviously has a lot of companies who do business in Cuba, and Spain could be very helpful in putting increased pressure on the Maduro regime,” said a source familiar with the discussions. “It could revoke hundreds of visas from Maduro regime and supporters, which would be helpful.”

The decision announced Monday was a partial implementation of Title III of the Helms-Burton Act of 1996 that allows Americans to sue companies with businesses in the United States that also have invested in confiscated properties in Cuba. Since Helms-Burton was passed, Congress has suspended Title III for six months at a time twice each year.

“With this decision, the United States is holding the Cuban regime accountable and opening a path of redress for us claimants whose property was illegally and unjustly seized by the regime,” a senior State Department official said. “It also sends a strong signal to our partners that we take democracy in Cuba seriously. And anybody who traffics in property in Cuba should be mindful of whether that is confiscated property. “

The administration has been warning such a decision was coming. National Security Council advisor John Bolton told el Nuevo Herald in November that the administration was “seriously considering” the proposal not to suspend the provision in Helms-Burton that allows Americans to sue.

Sen. Marco Rubio, who has been among those pushing for implementation of Title III, said Trump is sending a strong message that the United States “will not sit idly” by while the Cuban regime continues to support the government of Venezuelan leader Nicolás Maduro.

“By beginning the process of implementing Title III and Title IV of the Helms-Burton Libertad Act, the United States is holding the Cuban regime accountable for its crimes, including its support for the murderous Maduro crime family,” Rubio said. “Justice is coming — and it is just getting started.”

Those who pushed back at the State Department have raised concerns about the potential burden on U.S. courts and increased tensions between European allies and others who have criticized the extra-territorial application of the law.

Lawyers who represent companies with interests in Cuba expressed surprise and concern about the long-term implications on the courts.

Robert Muse, a Washington lawyer specializing in U.S.-Cuba matters, said the Cuban government is unlikely to fight the cases in court and could create challenges in the future if and when trade relations are normalized.

“This is casting a very broad net and is going to produce a lot of litigation inevitably,” Muse said. “Word will quickly spread that Cuba is not defending these suits and people will file multimillion-dollar lawsuits. It’s like a lottery. You take a number and sit down. It’ll come in. And then you tell the U.S. government you now have an obligation to extract this money from the government of Cuba in payment of my federal court award.”

“Nonetheless, even a partial enactment remains a reckless exercise,” Herrero said. “Any degree of Title III enforcement would likely reduce the chance that claimants may eventually secure restitution through a negotiated settlement process.”

He said it could also freeze new foreign investment in Cuba for the foreseeable future, inflicting more harm on the Cuban people.

The Cuban government has warned against implementing Title III, arguing it would “dangerously reinforce the blockade against Cuba, flagrantly violate International Law, and directly attack the sovereignty” of other nations.