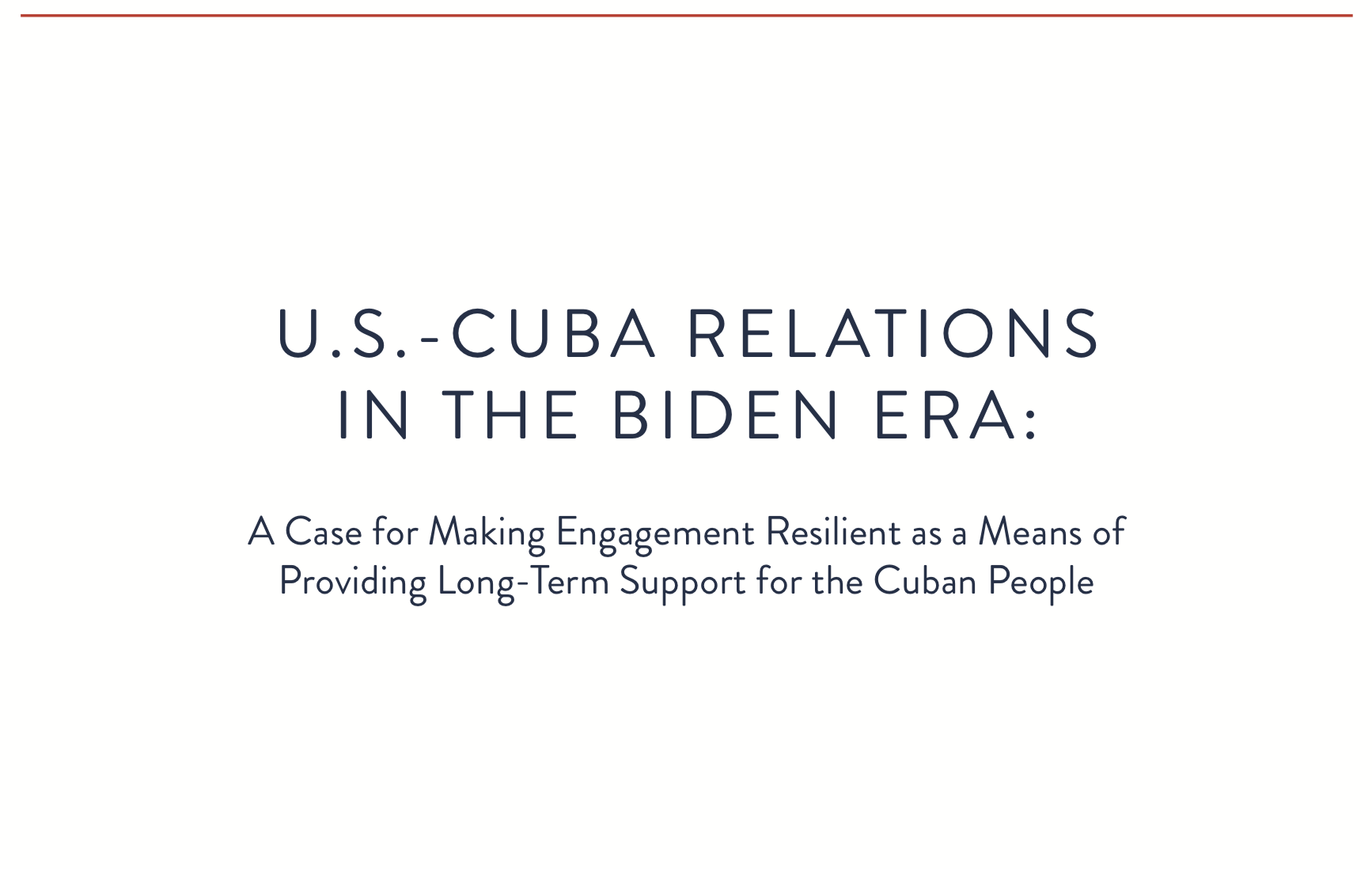 Washington/Miami – The Cuba Study Group, a non-partisan organization comprised of Cuban-American business leaders and young professionals, published a policy paper on Tuesday calling renewed diplomatic engagement with Cuba vital to advancing U.S. national interests and to promoting a freer, more prosperous future for the Cuban people. The policy paper, delivered Tuesday morning to the White House, is the first comprehensive policy vision delivered to the Biden Administration by a prominent Cuban American organization, and challenges both the United States and Cuban governments to “strive to make the normalization of relations resilient in order to insulate progress from unpredictable political cycles.”

The policy recommendations come just two weeks after the White House asserted that its efforts on Cuba policy will be grounded in support for democracy and human rights, and that Cuban-Americans are the best ambassadors for freedom in Cuba. The policy paper, titled U.S.-Cuba Relations in the Biden Era: A Case for Making Engagement Resilient as a Means of Providing Long-Term Support for the Cuban People, which can be downloaded in English and Spanish versions, calls for a new approach at engagement that puts long-term support for the Cuban people, and their well-being, at the center of U.S.-Cuba relations

“As the new Administration undertakes a review of standing Cuba policies, it’s important to communicate that simply reversing Trump era actions that unduly harmed the Cuban people during the last four years won’t be enough,” said Carlos Saladrigas, Chairman of the Cuba Study Group. “We believe the Cuban people at home and abroad hold the keys to more resilient relations between the United States and Cuba, and should be seen as partners in this effort. That means both governments must take proactive steps to strengthen ties between their nations’ civil societies and private sectors over the next four years. Only through deep and transparent socio-economic bonds will we be able to protect progress toward normalization against cyclical political winds.”

The policy paper reaffirms that the United States should continue to highlight Cuba’s democratic failings and continue to support actors across the Cuban spectrum working to ensure that greater economic and civic freedoms are guaranteed on the island. It cautions, however, that “strident denunciations of the failures of communism and absolutist conditions for sanctions relief are feeble substitutes for robust diplomacy” like the kind needed to empower the Cuban people to shape their own destinies.

The first track lays out detailed policy recommendations for rolling back harmful Trump-era policies, as well as steps for restoring support for the Cuban private sector, resuming public health cooperation, restarting fundamental diplomatic functions, rebuilding trust, and better engaging Cuban-Americans as partners. The second recommends the designation of a special representative to tackle long unresolved disputes and to move forward on the negotiation of cooperation agreements. The track third argues for further openness to steps taken by the Cuban government, which has begun important reforms such as ending its dual currency and its recent expansion of the private sector. However, the Cuban government will need to recognize greater rights for its citizens to help cement progress and increase congressional support for further action on counterproductive Cuba sanctions or other targeted assistance.

“While the Cuban government was slow to respond to many of the opportunities provided by renewed diplomatic relations in 2014, the Cuban people themselves made significant progress expanding the island’s nascent private sector and civil society,” added Ricardo Herrero, CSG Executive Director. “Cuban-Americans are ready to be constructive partners, and have long contributed to the future of the island. The Biden Administration has a window of opportunity to act, and to do so boldly, but Cuba must also do its part. Failure to lock in significant progress during the next four years could entrench another generation on both sides of the Florida Straits into the patterns of hostility and suspicion that have defined most of the past seven decades.”

“Cuban-Americans are clamoring for a legal framework that makes it possible to openly work with and invest alongside Cuban entrepreneurs, not only to help them succeed individually but also to bolster the island’s nascent private sector and improve the island’s economy,” added Karina Duquesne, a Cuba Study Group Young Professional Member and corporate attorney. “Now that Cuba has opened up much of its economy to private enterprise, enabling Cuban entrepreneurs to open bank accounts in the United States and authorizing American companies to provide business-to-business services to those entrepreneurs would help build a community of stakeholders vital to sustaining this new era of engagement.”